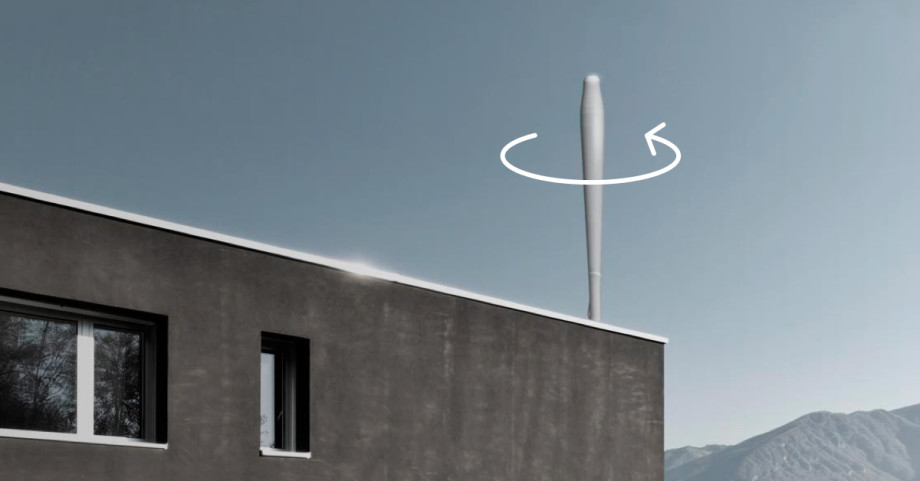 The future of wind technology in your backyard

Everyone knows what it's like to put a solar panel on a house, but what about installing your own wind turbines to produce wind power for your home? The options for wind have traditionally only been industrial scale. The vast fields of tall, looming white structures in the distance have become somewhat of a staple for travelers on their way to Las Vegas from Los Angeles or when driving through the plains of Central Texas. Throughout the United States, it’s becoming more common to see these large-scale wind farms.

The traditional 3-blade wind turbine hasn't changed much since Danish engineer Johannes Juul developed the first one back in 19571. Today, a 3-blade commercial-grade turbine is typically around 50 meters (164 feet) tall and generates an average of 2.5-3 megawatts of power. That's enough to power roughly 900 homes2. This solution works well for energy companies and utilities that require massive amounts of power generation. For individual consumers, installing a large 3-blade wind turbine isn’t an option. Going forward, technology will be instrumental in rehauling wind turbine designs so that residents can leverage the power of wind in their homes and local communities.

Nearly all homes in the United States are connected to the national grid. While more renewable energy sources are feeding into the grid, there's still power from dirty sources being mixed into it.

The network of wires, poles, and substations also has to be maintained, resulting in added monthly fees for residents. For homeowners who want lower operational costs and less dependence on the national power grid, the only viable option is solar. An extension of tax write offs from the government has increased solar's popularity, leading to an increase in residential installations by 95 percent in 2016.

However, in regions like the Northeast that have longer winters, solar isn't always effective year-round. There's a lot of potential for innovators to mirror solar's success and bring community and rooftop residential wind energy directly to the consumer.

One such innovator is Spanish-based research and startup company Vortex Bladeless.

Vortex is working on a bold new design that will enable individual consumers and homeowners to be able to generate their own wind power.

“We really wanted to create a device that would produce energy where it needs to be consumed,” said Vortex Bladeless co-founder David Suriol. “Essentially, what we want to be is the solar panel of the wind power industry. Homeowners will be able to use Vortex alone or supplement their solar panels with it.”

Suriol is referring to the cylinder, cone-shaped devices that Vortex has been working on since 2013. After going through 200 different earlier models, his company developed and released a prototype in 2015 that takes advantage of what structural engineers try to avoid: vortex induced vibration. This natural phenomenon is what caused the Tacoma Narrows Bridge to collapse in 19403. Vortex cylinders are designed to take advantage of this vibration effect in order to generate power. Vortex is working on optimizing the design so that it can generate enough power for a typical American or European home. “Right now, our one meter design only generates five watts of power,” said fellow co-founder Raúl Martín. “Since the prototype launched, we've adjusted the geometry and put magnets into the mast so that when the wind changes, Vortex can adjust on its own and keep up the same rate of oscillation to generate as much power as possible.” Vortex needs to prove its cylinders can generate its target goal of 100 watts before considering full-scale commercialization.

The Winds of Change Come with Challenges

The innovation Vortex is working on isn't meant to replace utility-scale wind turbines.

Industrial wind farms using the traditional 3-blade wind turbine design will continue to grow so the United States can achieve its goal of a 100 percent renewable energy grid. However, there is also a need for community and rooftop residential wind energy that enables homeowners to take direct action and generate clean power. The challenge for this residential-scale wind power is to make it as cheap and easy to install as solar panels. Additionally, it needs to be low maintenance to encourage more people to adopt it. Once the design is finalized, Vortex believes its cylinders will be able to address each of these concerns. Maintenance will be relatively low, and the use of smaller-sized models means costs should run relatively low as well. Installation, however, is a tricker hurdle to cross. Vortex recognized it would need to partner with the right distributors and installers and ensure they’re trained on installation and able to assess a property and determine the optimal location.

“With solar, it's much easier,” said third co-owner David Yáñez. “You just need to know where on the roof is best to get the most direct sunlight. With wind, it’s a lot more complex. You’ll need experts to determine where the best wind will be on a property.”

There are also concerns when scaling up and implementing bigger cylinders. Wind turbulence will impact objects differently depending on their size. “In some cases Vortex is able to take advantage of turbulence, in other cases can be negative or negligible.” Finding that sweet spot will be the challenge as Vortex's engineers hurry to perfect their design so they can test it and go to market. One thing they are confident about: neighbors shouldn’t have any noise complaints if there’s a Vortex cylinder installed next door.

“Because there is less surface area than a traditional wind turbine and no moving parts, there is going to be a lot less noise,” says David Suriol. “We’ve estimated a noise level of zero decibels because it falls under 20 hertz. Below that, the human ear can't detect anything. We haven’t proven this yet, but we’re confident that noise won’t be an issue for consumers.”

The potential for Vortex is strong, and the company is quick to consider compatibility with home battery banks like the one Tesla and SolarCity is working on.

“If we had to go to market tomorrow,” David Yáñez explains. “We'd want to knock on the doors of customers who had solar power. They already are familiar with an installation process and understand the benefits of renewable energy on a residential scale. It makes sense that they would consider supplementing their power needs with Vortex.”

The Future of Bladeless Designs

Vortex isn't the only company working to improve wind design for individual consumers.

Turkish startup Saphon Energy4 developed a bladeless wind turbine after being inspired by sails5. It moves in a figure eight motion to capture wind and convert it to energy. The company is working to improve the design so that it converts 80 percent of the wind it captures into energy. If achievable, it will be a huge asset to the residential wind market.

Vortex agrees that making more options available to the consumer is always good. “In places like San Francisco, Chicago, and Los Angeles, we think you will soon start to see Vortex in the back yards of homes. We want to be as ubiquitous as solar panels.” There is huge potential for wind energy at the individual consumer level. Renewable energy companies like Vortex and Saphon Energy are working hard to get their technology to market so that wind is even more accessible to the average person. Soon, you might see a Vortex cylinder or a Saphon Energy bladeless turbine installed in your neighbor’s backyard, supplemented by a solar system. Cities will likely invest in community wind projects if they work in a similar way to community solar projects. At Inspire, we’re excited to see where this next wave of wind energy innovation will take us as we all collectively work towards a brighter energy future.

Want to be a part of that future? It's easy when you make the switch to Inspire.

Ready to make the switch to clean energy?

Learn what it means to be carbon neutral & live sustainably

Why Don’t We Use More Renewable Energy

Is it possible to use renewable energy and resources more often?

Read Why Don’t We Use More Renewable Energy

Stay in the loop with weekly updates from Inspire.